The 39-Storey Treehouse by Andy Griffiths , Illustrated by Terry Denton (free download), Andy and Terry’s amazing treehouse has thirteen new levels! They’ve added a chocolate waterfall you can swim in, a volcano for toasting marshmallows, a bulldozer-battling level, a baby-dinosaur-petting zoo, a not-very-merry merry-go-round, a boxing elephant called the Trunkinator, an X-ray room, a disco with light-up dance floor, the world’s scariest roller coaster and a top-secret thirty-ninth level which hasn’t even been finished yet! But how can they enjoy all this brilliant stuff when they have to write a book faster they’ve ever done before? You’ll have to read it to find out!

The 39-Storey Treehouse is the third book in Andy Griffith’s and Terry Denton’s wacky treehouse adventures, where the laugh-out-loud story is told through a combination of text and fantastic cartoon-style illustrations.

This is silly and fun and a great book to encourage of love of reading in young children. I read this to my 5 year old daughter and months later she still makes reference to a scene in the book. She is a strong reader for her age and wanted to get the other books in the series. She started reading more bits of them herself before devouring the 65 and 78-storey treehouse books entirely by herself. The 78-Storey Treehouse she read in one sitting. She can’t wait for the 91-Storey Treehouse to come out later this year. * Toppsta Reviewer * I bought the set of these after reading the other Toppsta reviews. My son read this book solidly in one day. He has LOVED it, the mix of text and illustrations is ideal for this age range, I could hear him laughing away to himself whilst he was reading it, although I’m not convinced he followed the whole story, he has since read most of it again (as we were out and the next one was at home) A fabulous buy that will be read time and time again. * Toppsta Reviewer * Brilliant series and if you haven’t read them yet why not? Start at the beginning and work through them all. Laugh out loud funny and I love reading about all the things they have in their treehouse. * Toppsta Reviewer * I bought this book (the first in a series) on the basis of many positive reviews. Having now read it, I know my decision is vindicated. It’s funny, hugely imaginative and has LOTS of pictures. What child would not want a treehouse with see-through swimming pool, lemonade fountain, games room, bowling alley and marshmallow machine? Besides, this one is also home to book-making duo Andy, the writer, and Terry, the illustrator. But story-making isn’t always straightforward, especially when there are gorillas to contend with. No matter, flying cats to the rescue! And when the story is over, there are still jokes, a spot-the-difference, a maze, wordsearch and treehouse triva to enjoy.

Andy Griffiths is Terry’s best mate. He is also Australia’s number one children’s author! His books, including his popular Treehouse series, have been hugely successful internationally, winning awards and becoming bestsellers in the UK and the USA as well as in his homeland, Australia. The fourth Treehouse book, The 52-Storey Treehouse, won the Australian Book Industry Awards Book of the Year prize, the first children’s book to ever do so. Andy thrives on having an audience: he has worked as a high-school teacher, been the lead singer in a rock band and a stand-up comedian. He is a passionate advocate for literacy, has two daughters and lives in Melbourne, Australia.

Terry Denton is Andy’s best mate. He is also a bestselling and award-winning writer and illustrator based in Melbourne, Australia. Among other things, he worked on the Horrible Science series for Scholastic UK. He lives by the beach with his wife and three kids. 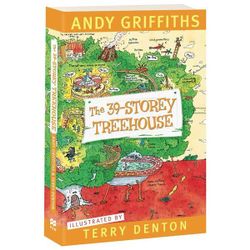 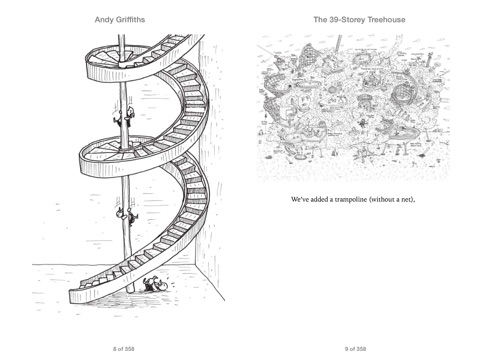