It's the day of the big game, and Froggy is ready. 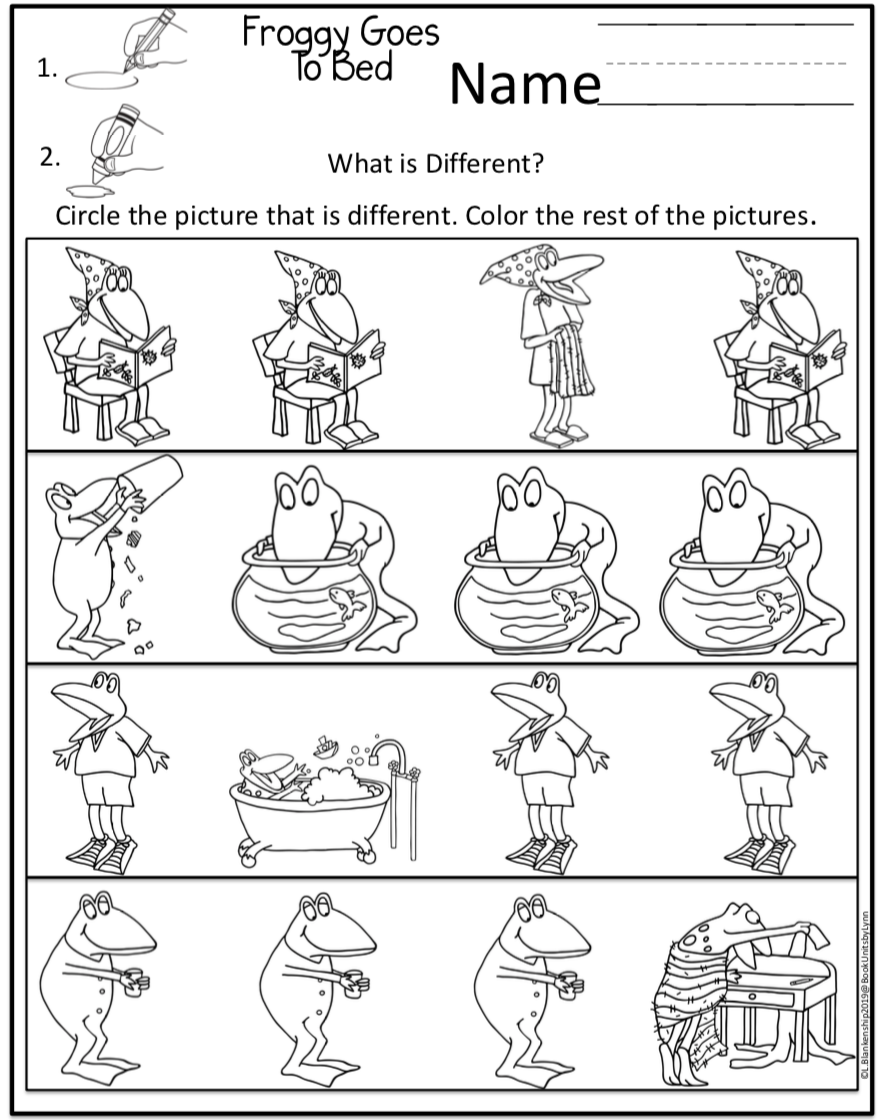 It's the day of the big game, and Froggy is ready. His soccer team is playing the Wild Things for the City Cup. All Froggy has to do is remember the rule: 'Head it! Boot it! Knee it! Shoot it! BUT DON'T USE YOUR HANDS!' But Froggy's busy doing cartwheels and picking daisies. Uh oh, Froggy! Here comes the ball! Budding soccer players and Froggy's many fans will welcome Froggy's latest hilarious adventure. 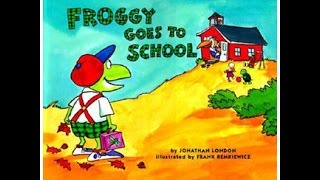 Froggy wants to go out and play in the snow, but his mother has to keep calling him back in to dress him properly for the cold weather.

Zzzziiiinnngggg splash! Everyone’s favorite frog learns to swim! Frogs are supposed to be great swimmers. 'Not me!' says Froggy, who's afraid of the water. But with a little encouragement, some practice, and the help of a silly song or two, Froggy becomes an expert frog-kicker! “Froggy’s childlike dialogue and the sound words—‘zook! Zik!’; ‘flop flop . . . splash!’ make this a wonderful read aloud.” —School Library Journal An IRA/CBC Children’s Choice A Junior Library Guild Selection

Once Upon a Zzzz

Once upon a time, an author took a snooze and an illustrator took the reins telling the story—exactly the way she wants! Featuring a llama princess, a scheming penguin, space travel, and maybe even a ninja—or, wait, a dragon!—this rambunctious, clever, no-holds-barred 'meta' story will have young readers giggling from start to finish.

Spring is finally here, and Froggy can’t wait to go on a bike trip with his dad. But first he needs to find his bicycle helmet, butterfly net, and trading cards—will Froggy get on the road before sunset? With kid-pleasing sound effects and punchy illustrations, Let’s Go, Froggy! is the perfect choice for the read-aloud crowd. “A fun-for-all, tongue-tangling, giggle-getting, rousing reading-aloud . . . Should be a storytime favorite.”—School Library Journal

Froggy's mother knows that everyone's nervous on the first day of school. 'Not me!' says Froggy, and together they leapfrog to the bus stop -- flop flop flop. Froggy's exuberant antics will delight his many fans and reassure them that school can be fun.'This is a great read-aloud with sounds and words that encourage active participation....A charming story to calm those pre-school jitters.' -- School Library JournalJonathan London is the author of many books for children, including I See the Moon and the Moon Sees Me, Like Butter on Pancakes and four other books about Froggy.

Froggy has never celebrated Christmas; usually he's taking his long winter's nap. But not this year! Froggy's best friend, Max the beaver, wakes him up to join the fun. Soon, Froggy's gotten into the swing of things: finding a tree, wrapping presents, singing carols, and enjoying a holiday feast. Join Froggy as he celebrates his very first, and very best, Christmas! 'The humor and spirited artwork will put Froggy fans in the holiday mood!' (The Horn Book) 'Children who have delighted in the earlier books about Froggy will cheer him along as he experiences his very first Christmas.' (School Library Journal)

Froggy's off to camp! He packs a lot into one week: archery lessons, food fights, and scary stories around the campfire. But only Froggy could also manage to lose his trunks during swim class and overturn his kayak with the camp director in it. Froggy will keep his fans laughing with his latest antics.

There are so many ways to postpone going to bed--and Froggy knows them all! First he has to find the lost boat that's essential to his bath, next the toothbrush that finally turns up in the cookie jar. Then he moves on to the familiar routine of a last drink of water, a favorite bedtime story and one more goodnight kiss. With inventive antics every child will recognize, Froggy makes bedtime rituals hilariously his own. Jonathan London and Frank Remkiewicz collaborated on the seven popular previous Froggy books: Froggy Gets Dressed, Let's Go, Froggy!, Froggy Learns to Swim, Froggy Goes to School, Froggy's First Kiss, Froggy Plays Soccer, and the latest, Froggy's Halloween.

Froggy has a rollicking good time at his first Winter Carnival! It's Winter Carnival day, and Froggy can't wait to build a snowman. But school principal Mr. Mugwort says there is a lot to do first. Skating! Sledding! A snow fort! Finally it's time to build a snowman, but Froggy builds a snow dinosaur instead. And of course the day wouldn't be complete without a wild snowball fight. 'That was my best winter carnival ever!' says Froggy. 'That was your only winter carnival ever!' says his friend Max.

Froggy just got his very first bike, and it's exactly what he wanted. Almost. Finishing touches like a bell and a horn have to be added before Froggy is ready to ride. Then, surrounded by cheering friends, Froggy starts to pedal. Oops! He falls off. He tries again. Oops! Riding a bike is hard! After a long day, and a few bumps and bruises, Froggy finally learns to ride, and once he does, he can't wait to go again. Froggy Rides a Bike is a reassuring reminder that practice makes perfect and it's sure to make kids eager to learn to ride on their own.

Froggy and his friends are building a treehouse-with a lot of help from Dad. Their plans don't include Frogilina though, 'Boys Only!' says Froggy. But in the end, it's Frogilina who saves the day and joins the treehouse gang. Lovable Froggy returns in his 22nd laugh-out-loud adventure.

From the celebrated team behind Creepy Carrots!, Aaron Reynolds and Caldecott Honor winner Peter Brown, comes a hilarious (and just a little creepy) story of a brave rabbit and a very weird pair of underwear. Jasper Rabbit is NOT a little bunny anymore. He’s not afraid of the dark, and he’s definitely not afraid of something as silly as underwear. But when the lights go out, suddenly his new big rabbit underwear glows in the dark. A ghoulish, greenish glow. If Jasper didn’t know any better he’d say his undies were a little, well, creepy. Jasper’s not scared obviously, he’s just done with creepy underwear. But after trying everything to get rid of them, they keep coming back!

The Jacket I Wear in the Snow

Rhyme follows rhyme as layer after layer of winter clothing ('bunchy and hot, wrinkled a lot, stiff in the knee, and too big for me!') is first put on and then taken off to the relief of the child bundled inside. Clever rebuses and jaunty illustrations make The Jacket I Wear in the Snow especially fun for prereaders and new readers.

Froggy tries to find just the right costume for Halloween and although his trick-or-treating does not go as he had planned, he manages to enjoy himself anyway. Children have enjoyed the misadventures of trouble-prone Froggy in more than twenty books. Froggy just never learns—and that's why we love him! “An enjoyable, light-hearted comedy of errors, cheerfully illustrated with festive Halloween details.” —Booklist “Children will just love this frog, and non-scary Halloween stories are much needed, especially good ones.” —School Library Journal

Froggy thinks the new girl in class, Frogilina, is the cutest frog he?s ever seen. He can?t even concentrate when she?s around. When Frogilina smiles at him through the monkey bars, Froggy falls smack on his head -- bonk! A mere glance from her makes his insides all soft and wiggly, like he?s had caterpillars for breakfast. With Valentine?s Day just a week away Froggy really wants to know?could this be love??A fun-for-all, tongue-tangling, giggle-getting,?flap,? ?bonk,? ?slam? of a rousing read-aloud.??School Library Journal for Let?s Go, Froggy!